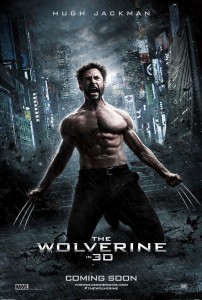 You know, I thought I liked this movie the first time I saw it. But turned out, it was even more fun to see the second time! This could have been partly due to watching Huge (sic) Jackman with a very appreciative audience the second time around (my wife), but far be it from me to comment on any drool that may or may not have been present

I went into this not knowing anything about it; hadn’t read any spoilers, seen much advertising for it, or anything. So I was honestly quite surprised to see that it was a direct sequel to the train wreck that was X-Men 3 and not something along the lines of the much better X-Men: Origins. Jean Grey, Professor X, Cyclops and half the Mutant population of…whatever city that was where Magneto led them to slaughter each other at the prison…remain dead and gone, the rest of the X-Men are somewhere, and Wolverine has put the claws away under the solemn vow never to hurt anyone again Old Man Logan style (they stay sheathed for a good 5 minutes of the film, anyway). Watching Logan go from the angry, brutal, broken man he is at the start of the movie to the regular angry, brutal man we all know and love was great. And was done really well (honestly). I loved the theme of redemption and healing throughout the story, particularly set against the motivations (fear, obsession, jealousy…) driving the antagonists of the film. It was also kinda cool to see all the action taking place in Japan – again, not what I had expected from a Wolverine movie! Maybe there’s some precedent in the comics I’m not aware of (and I want to say that Mariko is a familiar name to me for some reason…anything to say, Marvel fans?). Although, the setting – and the addition of the world’s fastest train – did lead to THE MOST LOW-OCTANE FIGHT SCENE OF ALL TIME. Seriously, these guys fought for nearly 5 minutes and they spent most of it lying down looking at each other! Though it did give me a good laugh at least

Also, I think one of the things that worked really well with this movie that wasn’t present in the others (well, I haven’t seen First Class so it might have been the same there too) was focusing on a few mutant characters, rather than having a screen full. For most of the movie you never had more than three mutants in the plot at any one time, and this allowed a lot more focus on the characters, rather than the pizazz. That made it so much easier to be interested in these people – and was a lot different to the bloody mutant apocalypse we saw at the end of the last (chronological) offering. In fact, I spent so much time investing in the characters that I was happy to overlook the fact that having no venous connection to your bone tissue (if, say, your bones were encased in metal) will kill you if you lose access to some sort of magic healing immortality for a couple of days…or that an acquired brain injury which makes you forget everything about who you are (just like the one at the end of Origins and right before X-Men 1) - including your lover, your brother and your past – would probably also make you forget about that time in World War 2 when you saved some Japanese guy from an atomic bomb…

Now, this is going to get a little spoilery, so if you haven’t seen the movie and want to see it pure, then hold off on scrolling down for the time being

Ok, so Jean Grey won’t be dead. I mean, she probably was dead at some point (when Wolverine gave her the Adamantium Shishkebab at the end of X3) but by the time of this movie, whatever MacGuffin/Mutant/Power of the Phoenix/Deus ex Machina was used to bring back Professor X in the after-credit sequence will have brought her back as well. I mean, C’mon – she’s the most powerful psychic power in the Marvel universe and we’re supposed to believe that Logan spent half the movie hallucinating her presence because of his guilt? Hell, the little line at the end of the movie about her being ‘put somewhere’ is an easy tie-in to some hand-wavium about her being psychically trapped in Wolverine’s mind or some such…or even just as simple as her being out and about somewhere and checking in on her old flame (ha! Pun attack!), or Phoenix being out and about and the Jean personality trapped, or anything except Jean Grey remaining dead. Not sure if I think it would be a good thing or not (same as my thoughts about how lucky it is Magneto is there none the worse for wear to reapply some Adamantium to our favourite mutant’s claws) since the Phoenix/Jean Grey of X-Men 3 was crazy insane (accurate, if tautological), but if it is true it would be interesting if the lessons of the past two Wolverine movies lead the writers/director to make a better use of her than “DERP DERP DERP KILL ALL THE THINGS”. And really, after the last couple of movies. I’m looking forward to seeing them have that chance