First off, some links for you:

Hey everyone, and welcome back to Average Joe!

Whoo, what a busy week it’s been! Came home the other day to find the house like this: 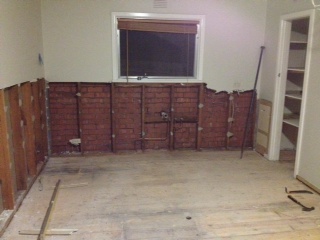 Someone stole our kitchen!

As part of the reno’s though, we have had the internet down for the past week (nooooooooooooooooo!), and intermittent power during the day. Since we’re normally at work, this wouldn’t usually prove to be a problem…unless you’re a lazy webcartoonist who just leaves his computer on overnight and was a teensy weensy bit lax at saving the photoshop file he was working on allll monday night…

So, once said webcartoonist finally clawed back the work done on the strip for Wednesday, it was just in time to head away for his anniversary weekend! A good chance to get away before the bub arrives, as well

But here we are, with a new Average Joe to greet the new week! And you all thought that I’d forgotten about Joe’s telekinesis

It’s one of those powers that can be a little abused when it’s not taken seriously (as I imagine you’d have to concentrate a bit to manage it!), but it’s one that I want to bring in a little bit more – I can think of a few ways it’d be useful for a superhero who’s having a little trouble with his flying

Anyhow, thanks for reading guys; we’ll see you back here on Wednesday for another instalment in the adventures of Australia’s most Average Superhero!